One of the most interesting charts I've seen recently is this, illustrating the relationship between GE's corporate profits and the salaries of its employees. As you might expect, they have not risen at the same rate. But the difference in those rates astonished me. For those who still wonder what the OWS folks are protesting about, here's an excellent example.

With Steve Jobs' passing, a lot of my friends have posted links to his commencement speech at Stanford. I watched it last night, and am glad I did. He posits the familiar question, "What would you do differently if today were your last day?" in a new way.

How would all of our lives be different if, instead of living each day fully, instead of striving, Steve Jobs had decided to spend each day playing video games and smoking pot? Or doing his best to fit in, going through the motions in a job or relationship he hated to meet others' expectations?

Listening to that speech made me think about what I want to accomplish before I run out of time here on earth. And if those things are so important to me, why am I not doing them? Why am I making my dreams such a low priority? How could the world be different if I lived each day fully, if I strove to make a difference?

Yesterday I reconnected with a friend from Columbia whom I hadn't seen since moving to Aiken. It turns out that he's just started working at the same company where I also recently started. For some reason, I was surprised that he remembered me and my husband. But why should I have been? I remember him and his wife.

As busy as my life is, there's a tendency to imagine that I live in a sort of bubble, interacting with others but never really affecting them, always moving along to the next thing, leaving no footprints behind. It's good to be reminded that if other people can affect my life, I can certainly affect theirs. I'm as much a part of the life of my friends and family as they are a part of mine.

Thinking about it that way, reconnecting with people I haven't seen in a while shouldn't come as a surprise, since, really, we're already connected.

I got a flyer in the mail yesterday from a pro-school-voucher group. The mailer was a full-color trifold on heavy, glossy paper with a CD insert. Now, I'm all for keeping designers employed, but all I could think when I saw this thing was, "What a waste of money."

That flyer didn't influence my opinion on "school choice" one bit. As a matter of fact, it makes me like this group even less (if that's possible). How many hungry people could we feed with all the money that's wasted on political propaganda each year?

This morning, I heard someone say, "Here in America, we're used to getting everything for free." My response was, "Really?"

Maybe it's a generational thing. As part of the generation of latchkey kids, hackers and makers, I'm used to the idea that nobody's going to give you anything, you have to do it or make it for yourself. For example, does anyone under 50 really expect to live off of their Social Security check once they retire? Are they even expecting to be able to retire if they can't save up the money themselves? I know I'm not.

I started thinking about what we do get for free in America nowadays. If you are down on your luck you do get some free things to help you out. Not necessarily great stuff, but a little bit to help you get along, if you're willing to ask for it and do the necessary paperwork.

What about for people who aren't poverty-stricken? We get a free education, kindergarten through twelfth grade. We get free t-shirts and other schwag from community events. We can even get free food at promotional events, sometimes. We've got free parking, free beach access, free concerts in the park. I've even gotten a bunch of neat free stuff just for blogging, like wall decals and books. And don't forget about Freecycle!

So, I guess there is a lot we can get for free in America. I'm feeling richer already! But I'm still saving up for retirement.

This morning I had to go to the bank. 5-year-old D-Mac was with me, and he asked me what happened to the money he put in the bank. I explained that the bank let other people who needed it borrow it.

"The bank charges them a fee," I said, "and a little bit of that fee they pay goes back to you. That's why your money grows when you put it in the bank. Banks help people save money and loan money to people who need it."

Thinking about all the bank failures of the past two years, I added, "That's what good banks do, anyway. That's what our bank does." (It's a local credit union.)

"Have you heard the words 'financial crisis' on the news Daddy and I watch on the TV? Or on the radio? They keep saying 'financial crisis,' 'financial crisis.'" D-Mac gave me a blank look. "Well, if you listen," I said, "you'll hear it. They say it a lot. The financial crisis happened when a lot of banks took all their money and gambled with it and lost it.

"They were greedy." By now we'd arrived at the bank. We went in and I did my business. The customer service lady let D-Mac pick out a lollipop.

As we headed for the door, D-Mac stopped to look at CNBC on the bank's TV. I explained that the graphs showed the prices of oil and copper and gold. A graph of the S&P popped up, and I said that showed how much everything cost.

"Well, no," I corrected myself, "actually that's the amount of money people are gambling. Not all gambling is bad. It's OK as long as you don't spend more money than you have.

"That's what the bad banks did. They gambled money that they didn't even have. It's like, if you had $100 and you bet $1000 and you lost, you wouldn't have the money to pay. If you were at the horse race and you bet $10 that your horse would win, you'd better have the $10 or else you shouldn't make the bet, because then you couldn't pay what you owed and you'd be in trouble. That's what the bad banks did. Pretty dumb, huh?"

D-Mac looked at his lollipop. "They were dum-dums," he said.

The latest Facebook updates have made it just about impossible for me to keep track of what my friends are up to. So instead of going there to see what's going on, I just jumped on over to LiveJournal for the first time in forever. At least here, I know what I'm going to get. Suddenly, I feel like catching up on the latest from

babyslime again, and reading about what all my Sewanee sisters are doing with their lives.

Of course, this all depends on everyone else not abandoning LJ for other sites, or at least coming back if they did.

I finally posted another Day In the Life. Here it is. Please comment, and vote if you feel moved to do so.

It's been a very long time since I've read or posted anything here, but I didn't want today to pass without comment.

This morning, George's Grandma passed away. Harriet was 93 and will be greatly missed. We just spent a week at the beach with her and the rest of George's family - I still can't believe she's gone; we had made the kind of little plans for the future that people do ("I'll mail you the pictures," "We'll visit next month") and now those little things just won't happen. At least she got to spend her last week with her family in a place she loved. She got to see all her grandchildren and great-grandchildren, eat her favorite foods, and visit her brother.

She lived in Atlanta, and back when I lived there I really enjoyed visiting with her. She was so interesting to talk to - not only did she have interesting ideas and opinions about current events, but she knew all the really good family stories back generations. When George's sister was living with her, sometimes the three of us would stay up late just talking.

I'm glad that D-Mac and Ducky got to know her, and she them. They called her "GG" for Great Grandma. I'm glad that I got to spend one last week with her, and I'm relieved to hear that she went quickly and didn't linger. And I am very sad that she is gone.

A couple of tornadoes touched down just a few miles from our house early Saturday morning. Fortunately, no one was hurt and we were blessed with beautiful weather for Easter Sunday. 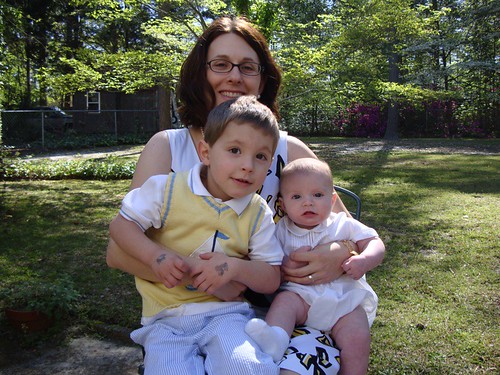 We all managed to get dressed up and out the door in time to make the 9:00 service at St. T's. D-Mac participated in the Easter Egg hunt in the churchyard afterwards (I forgot the camera, so no pictures). The Easter Bunny came while we were at church, bringing chocolate to D-Mac and stuffed animals to Ducky. You can see more Easter pictures on my Flickr page.
Collapse